Ok, so I finally took down all my Christmas Decorations on Monday. I had just moved into this house right before Christmas so we went from unpacking straight into Christmas decor. When we moved here we went from 1376 sq ft to 2192… a wee bit bigger than I was used to (which I LOVE). BUT this showed me how much I don’t have to hang on my walls!
I have seen some awesome gallery walls lately and I want to do one! I’m a pretty visual person though, so for me to just bust out with a bunch of picture frames would probably end in some sort of epic fail and then I would have nothing to blog about except how NOT to do a gallery wall!
So let’s take a look at my living room wall. 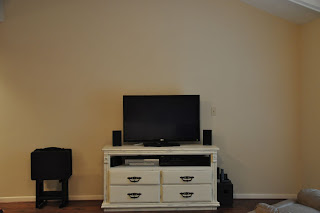 There is nothing on it right? I know people say to hang paper and stuff on the wall, but I wouldn’t know what to cut out and let’s face it.. that takes some time! I will do that when I have bought my actual frames! So what is a visual girl to do? Oh! Did I mention that I am also a very symmetrical person? I have a hard time with balance, everything has to be the same on one side… I don’t necessarily like this about myself, but I have a hard time visualizing things that aren’t that way. I like asymmetrical designs.. my brain just won’t take me there though!
Try to figure out a way to see what it could POSSIBLY look like before you start cutting up a bunch of paper and buying a whole lot of frames!
I made a digital gallery wall! 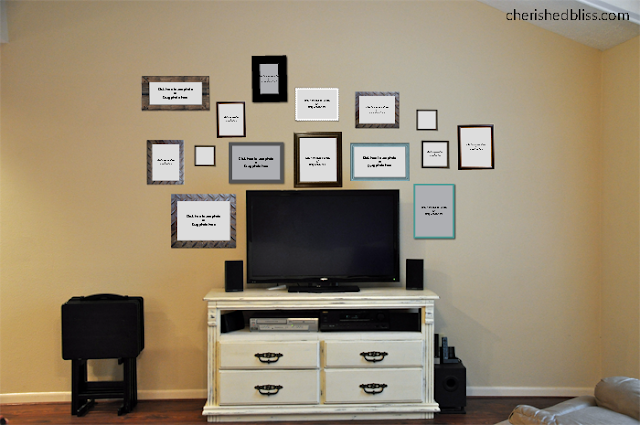 Here is what I did
-I took a picture of the wall I want to turn into a gallery
-Opened it up in Photoshop Elements (which I love by the way)
and started adding some frames from the little section in the program (not sure what it’s called… but you know what I mean right?)
You could totally do this in paint if you wanted and just add squares and rectangles, but I figured I should use this since I have it ; )
All those little words.. yeah those are telling me to insert pictures, but I really just wanted to play around so I left them just like that. This always me to see what kind of shapes I even want to start looking for. It’s not exactly how I want it yet, but I’m visual, and I also change my mind a lot… when I finally get it how I want it, I’ll just know : )
Pretty cool huh?

Don’t forget to check out the Pick Your Plum Contest Coming SOON!!