Happy Monday Everyone! As promised I will be sharing a few behind the scenes shots of what my house really looks like while I photographed our Christmas Home Tour. I will say, Christmas is probably the craziest time for bloggers. I usually try to make home tours a good reason to get the WHOLE house clean and kick everyone out, but during Christmas I often have a lot more deadlines than normal that have to be posted in a very short window of time, so I’m much more pressed for time! Not to mention this year we also decided to tear apart our bathroom (I shared the before pictures just the other day), so while I was pulling out Christmas decor, I was also pulling down tile and vacuuming up obscene amounts of sheetrock dust! So you can imagine the neglect the house was seeing. Laundry was a nightmare, the kitchen looked like 5 meals were being cooked at once and nobody was doing dishes… oh wait, that’s exactly what was happening. I was photographing a food post in there, and my husband was helping with the bathroom… it has been a scary few weeks around here. So let’s just get the worst out of the way… while photographing our living room… this was our kitchen. 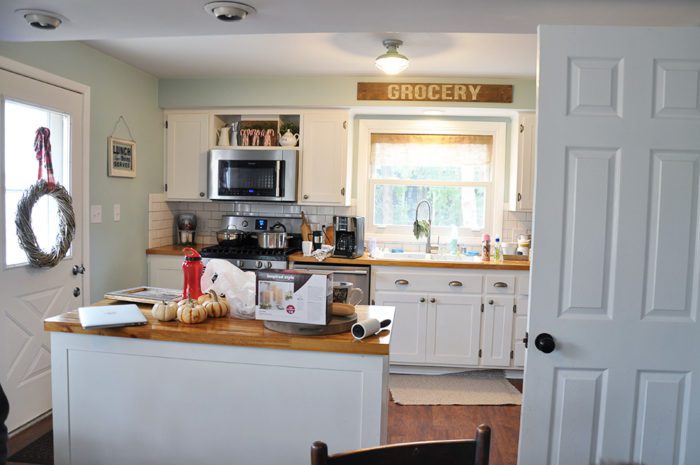 There was stuff everywhere. See how I still have pumpkins. Yeah, my kids will be scarred for life, haha!! There is also that wreath on the door that my daughter keeps insisting that we hang up and it has been in several different spots throughout the house because she keeps changing her mind. I have NO clue where she gets that from! ;) It’s not like I have a problem with that. Must be from her father, hehe! 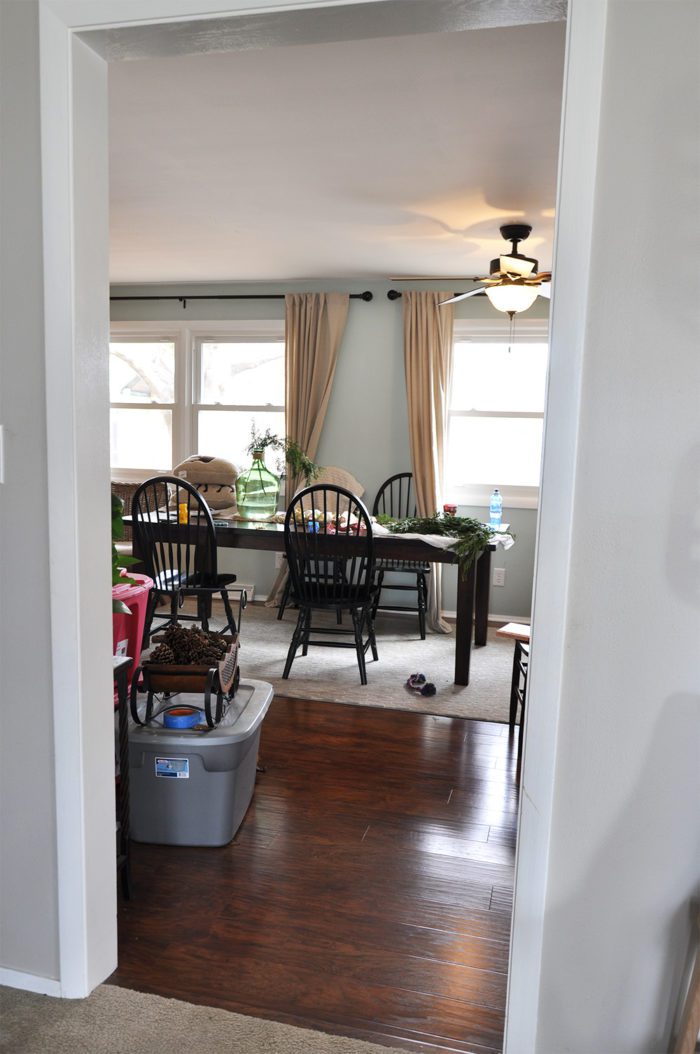 Peeking through the doorway that leads from the living room to the dining room… well you can see this is where I was putting props, and in the middle of a few other projects. I was running around like a crazy person waiting for clouds to pass balanced with running out and stealing more clippings from my neighbors trees. I only took a few, and I tried to get them in a spot in our backyard that was hanging over our fence, so that’s ok right?? I also tried to do it so it was like I was pruning.. at least I’m a nice evergreen thief! :) 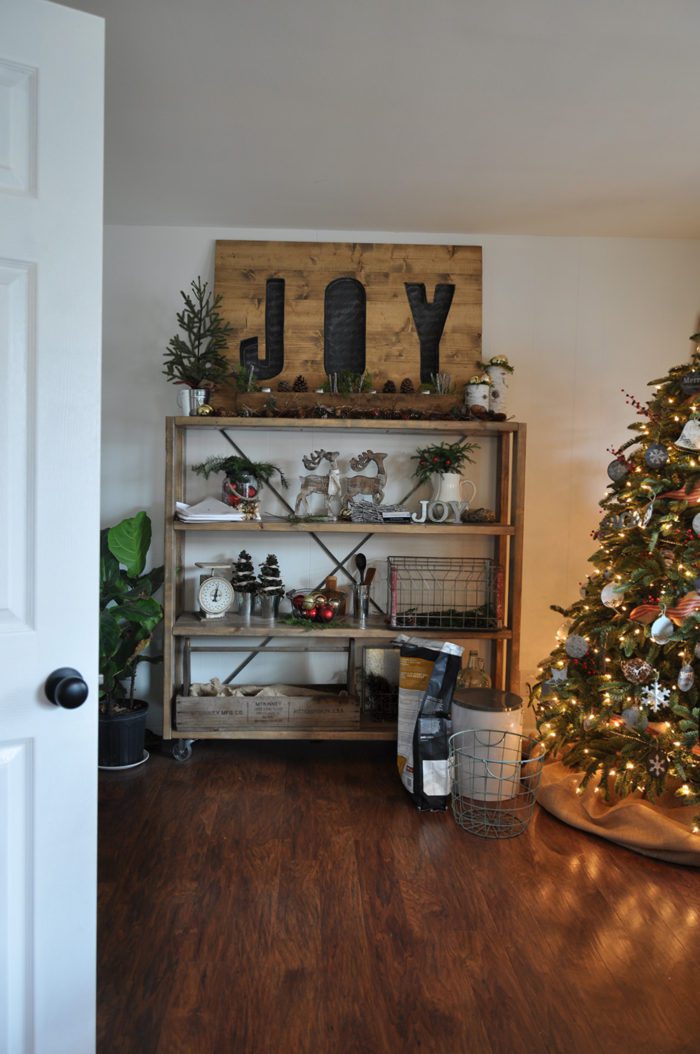 See this shelf… that’s why I was taking more clippings. It was lacking! Plus some of this I had done the week prior and it was starting to droop so it needed to be replaced. I literally had to finish this stuff while photographing the other side. I probably looked like a mad woman running from one side to the other, outside with scissors, then back inside and moving random things around. Yeah… normal day around here.

I also had all my tubs up from the basement as I started pulling ornaments out for staging. Pretty huh?? 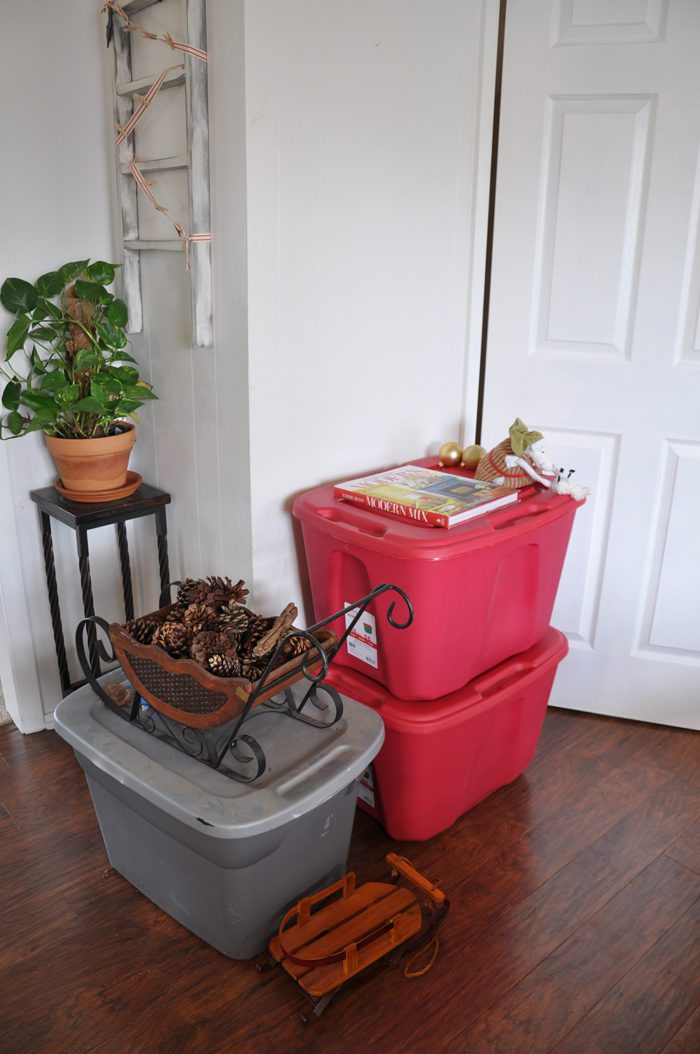 After I moved all the props off the table so I could stage the dining room… well this is what was on the other side. 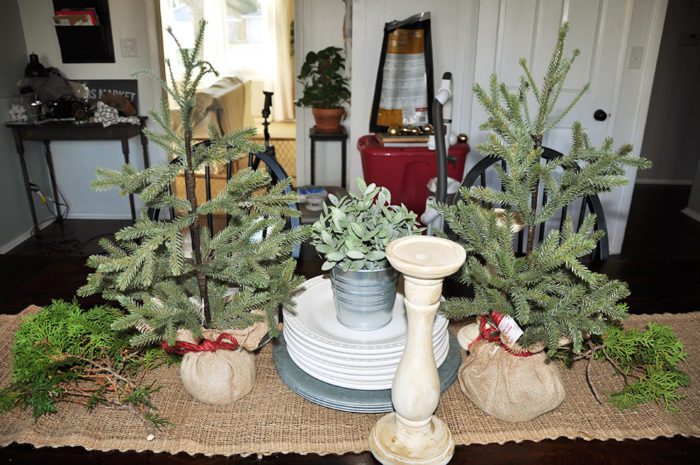 The tubs and vacuum make a nice background feature don’t they? And of course more props stacked up on my Farmhouse Writing Table over there in the corner!

Now let’s move into the living room. I actually had this room clean from the get go for a few reasons. One, I knew it would be the first room I photographed, and two… we have a puppy that will eat anything that’s not tied down so at least one room in our house has to be clean at all times! But I thought I would show you a few of the crazy things bloggers do for pictures. We move couches to crazy places for one shot! 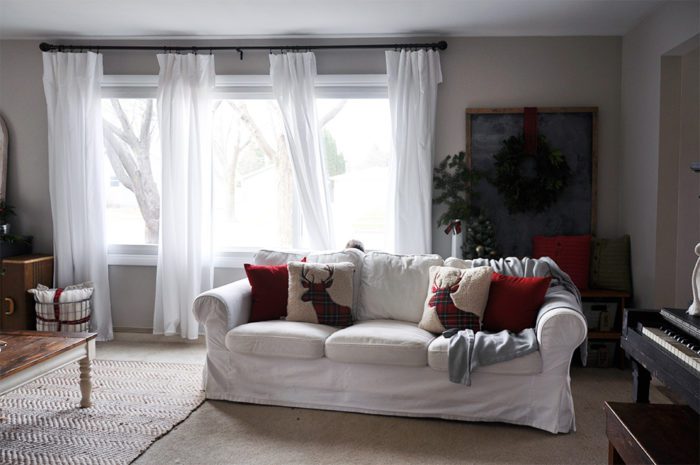 Also, another thing I wanted to share with you is all the little details you see, like that ribbon on the pillows of to the left there.. yeah that kind of stuff doesn’t survive the kids in this house! Most of those details have to me removed by me.. or get removed rather I want them to or not! We do live here after all ; )

Oh, my living room might be clean, but my entryway is kind of a dumping ground. 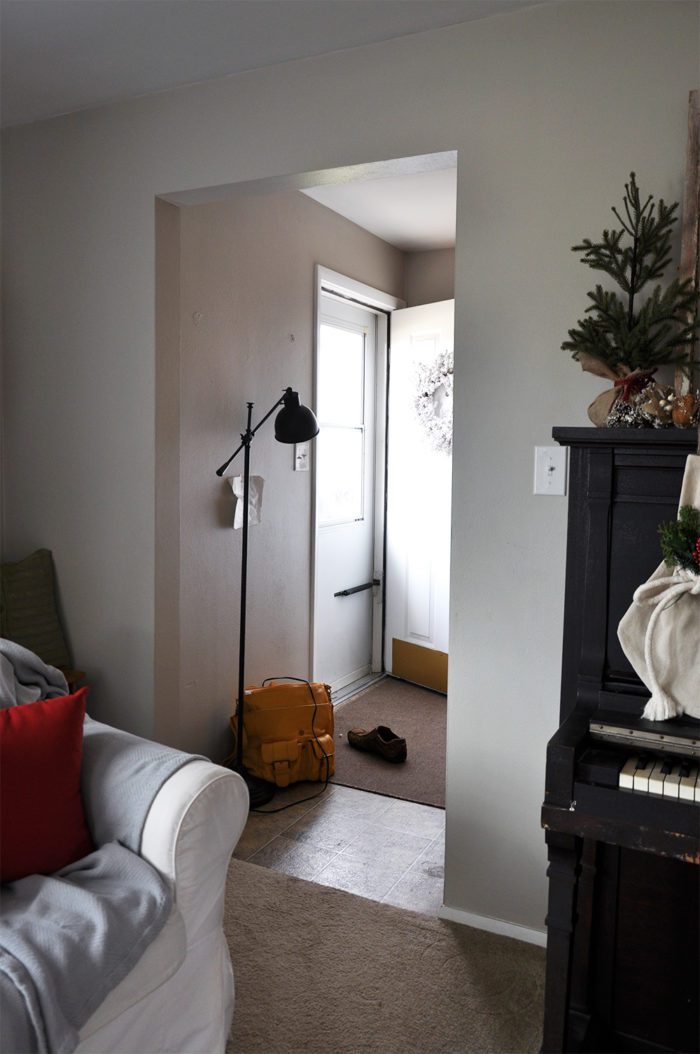 You actually can’t see the piles of jackets hanging on the wall and the shoe closet that looks like it threw up shoes for breakfast!

So that about covers it. My main reason for wanting to share this with you is because I get so many comments about how my house is always so clean and people could never maintain that kind of house with kids, yeah… me neither! My kids were at school and my two year old was running around with food in his hand during this shoot… when the other kids are home it’s 10 times worse. But when I have to focus so much time on once space, everything else is neglected. So do you feel better about your house now? I would say on average a bloggers house looks worse than someone who doesn’t blog. But that doesn’t take away our love of making things pretty for you!! : )

But on the bright side I get to capture these moments every once in a while photographing! Isn’t he seriously handsome?? I love him! 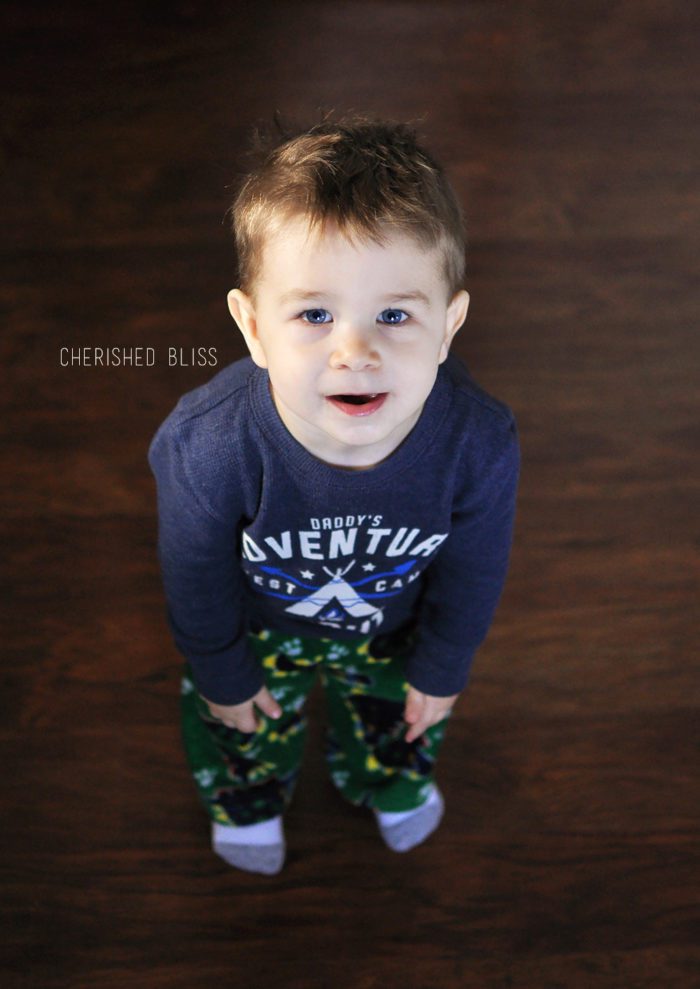 If you want to see the difference of our reality and what you see on the final shots, take a look at my Cozy Christmas Home Tour : ) aka… how I wish my house looked all the time! 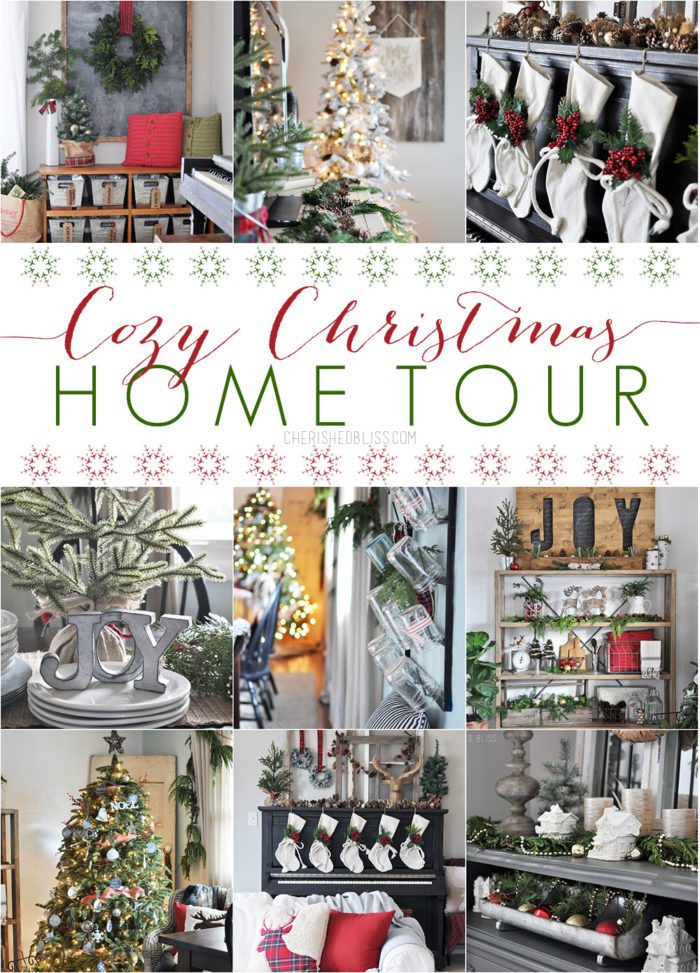